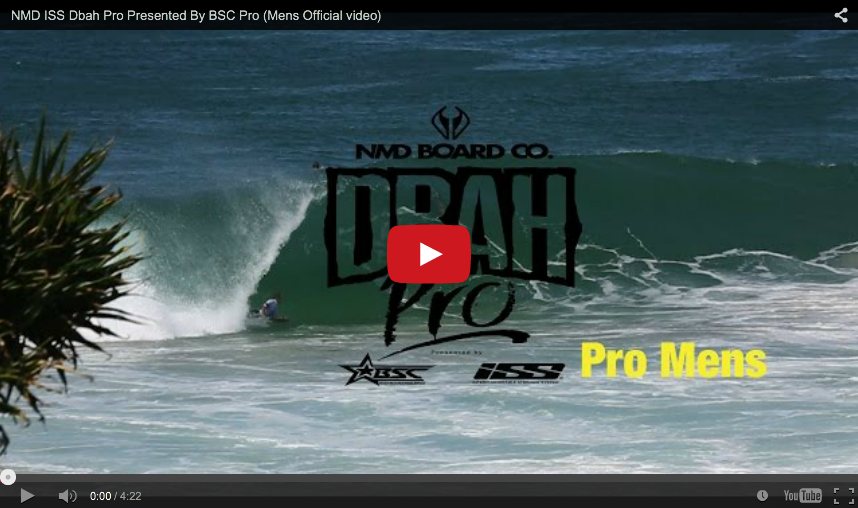 Video highlights are here – congrats Stoney, Winny and Eric Roy!
Competition at the second stop of the ABA Tour – the Dbah Pro – wrapped up on Sunday, but we thought we’d wait for the always stellar video highlights (above) before bringing you a full wrap-up (full results below). Now the attention turns to South Australia’s Knights Beach in late May!


Rock solid win for Stone at NMD D’bah Pro presented by BSC.Queensland’s Jake Stone has won the second event of the 2015 ABA Pro Tour when he defeated fellow Queenslander Lachie Cramsie in the final of Sunday’s NMD//ISS D’bah Pro presented by BSC. The former world tour Top 10 rider completely dominated his heats with a dazzling display of moves in the punchy peaks of Duranbah, and showed that he wants his second Aussie Pro tour title.
“It was pumping out there today,” said Stone. “It’s such a good wave to ride and makes it easy to compete in,” he added.A star-studded field rocked up for the second stop on the tour, with ratings front-runners Tom Rigby & Joe Clarke (Qld) dipping out in the quarter and semifinals. Cramsie looked like he was unstoppable until he hit the final, where the more experienced Stone looked to have a better read on the sandbank and choreographed his waves to perfection.The event also featured a Pro Junior and a Pro Drop-Knee division. Gold coast rising star Eric Roy (Qld) defeated a red hot field to score a spot on the upcoming Riptide Road Trip, while Dave Winchester (NSW) defeated DK legend Matt Lackey (Qld) to win the first ABA Pro DK event of the season.

The next event on the 2015 ABA Pro Tour, presented by Hog’s Breath Café will be in late May at the infamous Knights Beach wedge in Port Elliott, South Australia.